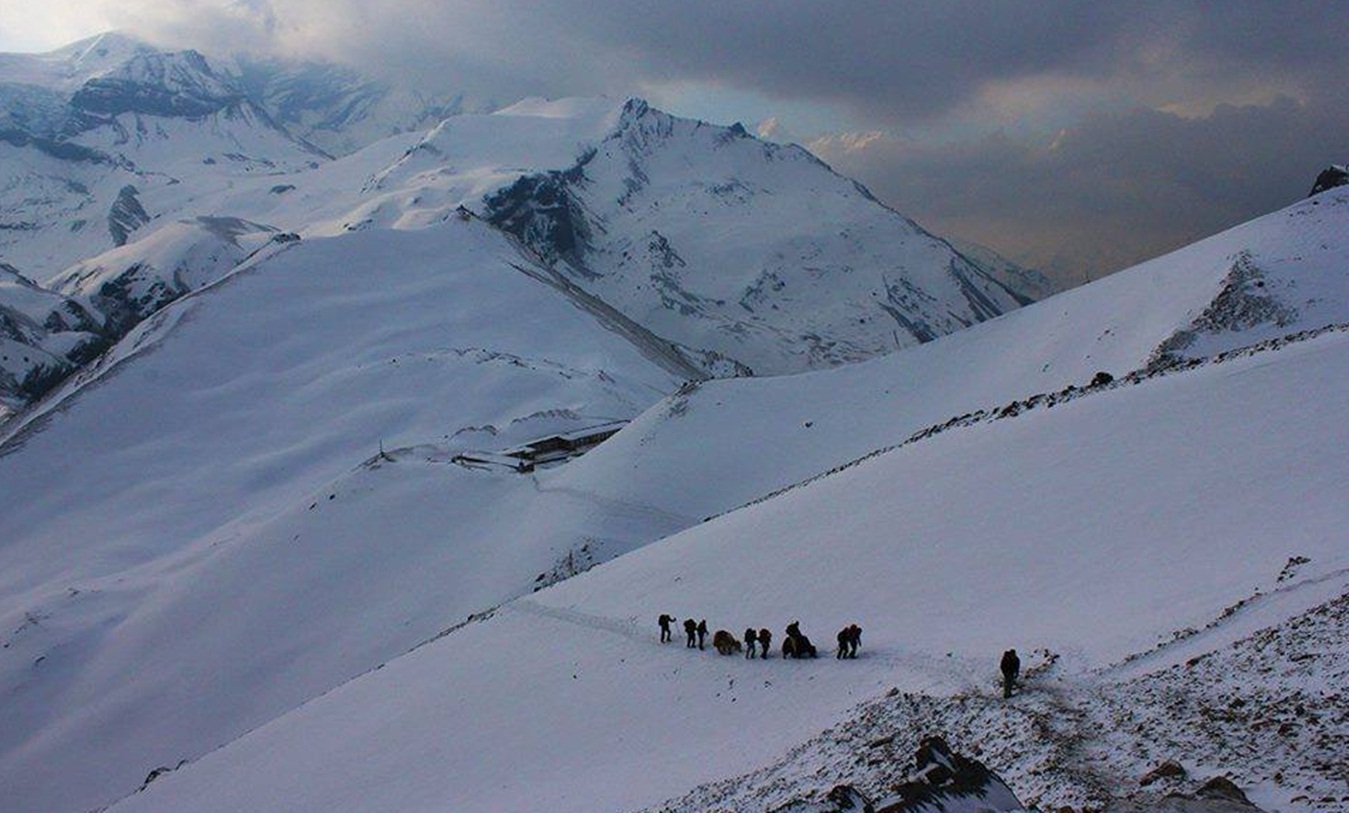 Peak Climbing and Preparing - Nepal is famous in mountaineering field which is challenge adventure package in Nepal Himalayan. The trekking peaks of Nepal offer a great potential for adventure and exploration and are less expensive than large-scale expeditions. For travelers who can stomach greater adventures, Nepal has 18 major peaks open for Alpine climbing under Nepal Mountaineering Association. The climbing of these peaks is controlled under the rules & regulations formulated by this Association. Nepal Adventure Point is member of (NMA) Nepal Mountaineering Association, we will prepare for you any peaks permit. It should be noted that in most cases the climbing of these minor peaks (Trekking Peaks) required snow and Ice climbing experience. All peak climbing information, itineraries details will obtain on your request.

Nepal trekking peak history tells us that in 1978, 18 summits are ranging in between 5,587 and 6,654 meters have been opened officially to climbing parties under the appellation of trekking peaks. Later on more 15 newly peaks were opened so there are now 33 trekking peaks which are opened for climbing. Nevertheless, we prefer referring to them as smaller Himalayan peaks, thus avoiding the misconception that these are peaks requiring no particular capacity other than good fitness. Although it is true that some peaks offer fairly easy routes and have been climbed by assisted parties with little mountaineering experience, most of them still require climbing experience, and some offer really challenging climbing, with routes in the tradition of the biggest alpine north faces, adding the high altitude as a complicating factor.

We can organize expeditions on any of the summits providing full camping support & mountain guides, who have been there and know the routes; however we have only listed some of the nice selected peaks for your convenience.

Climbing Seasons: The climbing seasons are followed as trekking season of Nepal, climbing can be done throughout the year but later part of spring and September thru November are more popular as weather and snow conditions are more stable and predictable. Winter climb is also getting popular among discerning climbers as snow conditions at this time gets relatively stable.

Departure Dates: Nepal Adventure Point will arrange any peak climbing trip on the dates requested by climbers. The spring season of March to May and the autumn season of September to November are considered the best time for any trekking peak climbing in Nepal. The above mentioned months are the classic climbing period in Nepal. The summer months of monsoon rains and the winter months from December to February are considered to be the most unfavorable time for climbing/expedition.

Meals and Logistic arrangement on our full supported climb - We provide 3 tasty, plentiful and nutritious meals daily with a variety of local and Western dishes. To start the day, breakfast consists of a choice of porridge, muesli and cereal followed by omelet, fried or scrambled eggs with chapattis or bread. Lunch is generally a selection of salad, cooked vegetable dishes, pasta and traditional breads. Dinner is a hearty 3 course meal - soup, followed by a variety of vegetable, meat, rice and pasta dishes and completed with a simple dessert. Tea, coffee and hot chocolate are also provided at all meals. We use as much fresh produce as possible and special diets are regularly catered for. The leaders are able to maintain very tight controls on health and hygiene in the kitchen with respect to general cleanliness and food preparation and also within the group with respect to personal hygiene. All foods are well cooked and vegetables are treated by potassium permanganate or iodine. Boiled water is served for drinking. Antiseptic soaps and potassium or iodine treated water are provided for washing. Special dietary requirements can always be catered for.

Administration team from office carry out all necessary logistics, such as getting climbing permit, help you get your expeditions goods thru Nepal custom, arrange local transfers, book hotels, flight etc. We allocate best climbing guide and assistants who have proven record in climbing high Himalayas, they speak reasonable amount of English, good enough to communicate with you on any mater.

Climbing Grade: To enjoying the trekking holidays, peak climbing or expedition trips in Nepal, it’s important to prepare yourself physically and to choose an itinerary that suits you. A number of our adventures include an element of climbing, usually on snow, where ropes and other items of mountaineering equipment will normally be used. These trips have each been given a trekking grade to reflect their overall difficulty and it is this grade which is shown on their grade symbol. Additionally, each of these trips has a climbing grade which is intended to indicate the technical difficulty of the ascent(s) involved and takes into account factors such as overall steepness, exposure and objective dangers.

Easy: Our easiest climbs, which are generally on easy angled snow-slopes, with no objective dangers. A mountaineering ice-axe and crampons may be used, depending on the prevailing conditions. Ropes may be fixed on short, steeper sections of ascent.

Moderate: Elements such as crevasses and steep snow slopes may be encountered. A mountaineering ice-axe and crampons will be used. Ropes may be fixed on steeper sections of the climb and group members may need to climb roped together at times.

Altitude Sickness: Altitude sickness if a serious consideration if you are trekking or climbing in Nepal and it's essential that you investigate the causes, symptoms and treatment of altitude sickness before you travel to Nepal. There are approximately three deaths per year in Nepal from altitude sickness, but with the right precautions there is no reason why you should become one of these statistics.

Acclimatization's the word used to describe the adjustments your body makes as it ascends. You should adjust your schedule so that you average no more than 400 meters per day of ascent above 3,000 meters. If you fail to allow time for acclimatization, you may develop symptoms of Attitude mountaineering System. The AMS may be mild enough to go away with a day's rest or if ignored may lead to death. All that is required to ensure a safe trekking is basic awareness of AMS, and a willingness to rest or descend if you develop symptoms. As a result of the growing awareness of altitude problems there is only one death from AMS in Nepal out of every 30,000 trekker’s and climbers. Even these deaths would be avoidable if everyone knew how to respond to AMS. There are no reliable figures for casualties among porters.

What is Altitude Sickness?
Altitude sickness occurs when someone has been unable to acclimatize to the point to which they have ascended. As ascent increases, then levels of oxygen decrease. It is asserted that there is half the amount of oxygen above 5000m like Everest Base camp, Annapurna Circuit as there is there is in the sea. During ascents in Nepal an individual will typically find that their breathing increases to account for the decrease in oxygen. This is a positive response by the body and seems to be genetic as individuals who are more prone to altitude sickness typically manifest this response less readily than those who are less prone to altitude sickness. Altitude sickness in Nepal happens when fluid collects in cells around the body as the result of failure to acclimatize. More severe forms of Altitude sickness occur when this fluid buildup subsequently builds up in the lungs and brain - the two most susceptible parts of the body.

What is the prevention?
It is essential that you give your body time to acclimatize as you ascend. If you fly into high altitudes during your trip to Nepal, then you should spend two to three nights at that place enjoying the local attractions and resting. This should give you time to acclimatize. You should take great note of your body at all times and if you feel the slightest of Altitude sickness symptoms then you should remain where you are until these have passed. As you ascend take frequent breaks at each 1000 meters and, again do not continue to ascend if you are feeling the slightest of Altitude sickness symptoms.

What is the treatment?

If you are experiencing Altitude sickness during your trip to Nepal then it is essential that you ascend immediately and do not attempt to climb again until your body has acclimatized.
Severe cases may need to be flown out, so ensure that you have adequate travel insurance during your Nepal trip

Learn the early symptoms of altitude illness and recognize when you have them. Remember, you may be the only person in a group with symptoms.
Never ascend to sleep at a new altitude with any symptoms of AMS.
Descend if your symptoms are getting worse while resting at the same altitude.

Mild AMS Symptoms – Never go higher: Many trekkers in the high valleys of the Himalaya get mild AMS, admit or acknowledge that you are having symptoms. You need have only one of the following symptoms to be getting altitude sickness.

Dangerous cases of AMS: High Altitude Cerebral Edema (HACE) this is a build-up of fluid around the brain. It cases the first five symptoms on the mild and severe lists previously. Coma from HACE can lead to unconsciousness are death within 12 hours from the onset of symptoms, but normally takes 1-2 days to develop. At the first sign of ataxia begin treatment with medication, oxygen and descent. Usually 4 to 8mg of dexamethasone is given as a first does, then 4mg every six hours, Diamox every 12 hours and 2-4 liters /minute oxygen. Descent is necessary but a PAC (portable altitude chamber) bag will often be used first if available. High

Altitude Pulmonary Edema (HAPE): This is an accumulation of fluid in the lungs and is very serious. It is responsible for all the other mild and serious symptoms and it is often accompanied by a mild fever. By far the treatment is oxygen at 4 liters a minute but using PAC (portable altitude chamber) bag treatment is a good substitute. If there is no PAC bag or oxygen then descent will be life saving. HAPE can lead to unconsciousness are death very quick.

First Aid Kit: This is the basic list to cover the more common ailments that afflict trekkers. Climbing group, expeditions and trekkers going to isolated areas will need a more comprehensive kit.

Other treatment modalities to help during descent: Diamox - Diamox is generally useful for mild to moderate AMS. Dosage: One 250 mg tablet two or three times a day. Dexamethasone - is a very potent steroid used in HACE temporarily to facilitate descent. This drug improves the symptoms but does not help acclimatization. It is not recommended to ascend while still taking this drug even if one is symptom free. Dosage: 4 mg every 6 hours. Nifedipine - is useful in HAPE by lowering pressure in the pulmonary blood vessels and thereby decreasing fluid in the lungs. This drug also lowers blood pressure. Sildenafil (Viagra) is increasingly being used in treating HAPE. Oxygen - is very useful particularly for HAPE.

Rescue/ Emergency Evacuation: In the case of a serious sickness or a casualty, which we believe will not happen; you shall be rescued by a helicopter. Since you are entirely liable for all the expenses incurred in evacuation please make sure that it is covered by your insurance before assigning for it or be prepared to pay on your own after getting back in Kathmandu. Ask your guide to arrange a runner to the nearest communication point and inform office about requirement of a helicopter. While asking for the helicopter, you are required to send name of the sick person and exact location from where helicopter can airlift you. Do not leave the place although you are getting better once you have ordered Helicopter.